Putin It Into Perspective: The Experience Of People Of Colour In Ukraine

The shows of global solidarity towards Ukraine as it fights against the Russian invasion, from regular civilians to mainstream media platforms to high-level political leaders, is perhaps the only heartwarming element.

People from all around the world are dedicating their time and attention to the conflict, whether they are donating funds, engaging in protests to condemn Putin, or in some cases, traveling to Ukraine to join the war effort as foreign fighters. But as the days go by and the world collectively celebrates Ukraine’s victories and mourns its casualties, we are understanding that there lies a sinister truth — that the international response to violence is always based on the race of those being victimized.

For many Black, Indigenous, and people of colour, the invasion of Ukraine is a staunch reminder of the double standard that permeates Western media and politics in responding to violence in western, white societies versus violence that occurs in non-western, non-white societies. After all, it is only now, with the Russian invasion of Ukraine, that the European Union has decided to enact its Temporary Protection Directive, which provides fast-tracked asylum protections for war refugees. Refugees fleeing decades of violent conflict in Sub-Saharan Africa and the Middle East have not been given the same grace.

This is present in the reaction by western media, such as by CBS News’ Charlie D’Agata, who caused a social media uproar when he said, “This isn’t a place, with all due respect, like Iraq or Afghanistan that has seen conflict raging for decades. This is a relatively civilized, relatively European — I have to choose those words carefully, too — city where you wouldn’t expect that, or hope that it’s going to happen.”

He was not alone, however, as many other media personalities and platforms have shared the same sentiments since. CNN’s Becky Anderson’s report of the double standards in global reaction towards refugees explains this further.

Even within the population fleeing Ukraine, non-white Ukrainians and foreign nationals of color are being denied access to transport and assistance as they too attempt to leave the country. Many have reported being denied entry onto trains or buses and being forced to make their cross-border journeys on foot, being separated from their white family members, being forced to wait long periods of time at the border and given little or no reason, being harassed by fleeing Ukrainians, or being hassled for identification papers by border authorities who easily welcome their Ukrainian peers without asking the same.

Rachel Onyegbule, a Nigerian medical student who fled Ukraine, recounted to CNN her experience: "More than 10 buses came and we were watching everyone leave. We thought after they took all the Ukrainians they would take us, but they told us we had to walk, that there were no more buses and told us to walk.”

Amoakohene Ababio Williams, originally from Ghana, told National Geographic that he was separated from his Ukrainian wife and young son just before the Polish border, being made to wait for hours alongside other Black men while Ukrainians were allowed to cross.

The high coverage of white Ukrainian suffering, taken in tandem with the continued dehumanization and denial of the victimization of Black, Indigenous, and people of colour experiencing the same, is all too reflective of how the world views modern-day discourse and conflict. Whilst Putin is vilified worldwide for his abuse of power towards fellow primarily white and primarily Christian Europeans, African citizens of the diaspora and Black Ukrainians suffer unnoticed under existing systems of oppression and tyranny on account of anti-Blackness. Mainstream media outlets call for public outrage and for the world to #standwithukraine as they share images of white Ukrainians fearing for their lives, while shocking reports of violence towards people from the African diaspora circulate on social media to a far more limited response. Despite the dire circumstances faced by all affected by the violence, racism, anti-Blackness, and eurocentric rhetoric continue.

Under the UN Declaration of Human Rights, all who flee persecution have the same right to seek passage. The idea that racism transcends this is both devastating and has bleak implications for the progression of a growlingly international society. The answer here isn’t that the world shouldn’t focus on the Ukrainian plight, it’s that the world needs to provide the same treatment and response to all refugees and victims of violent conflict and war, regardless of the colour of their skin. This should be a call for change for the implementation of a racially based humanitarian approach in Europe and the United States, many of which had been influenced by prior emergencies before Ukraine, to a more universal mechanism that emphasizes protection and assistance to all. 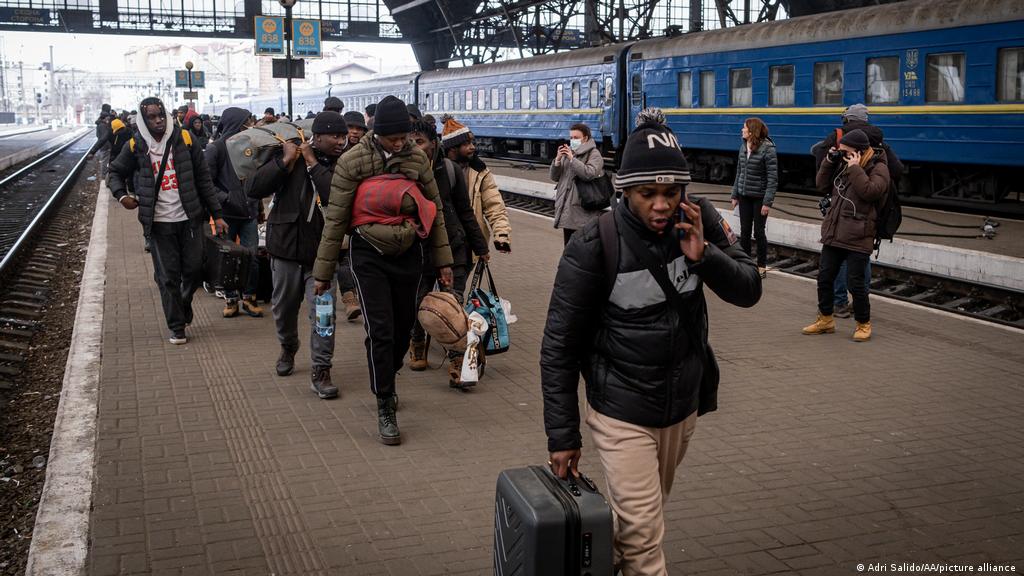 How You Can Help

Direct monetary donations can be made to the Ukrainian army via the National Bank of Ukraine, to fundraisers raising money for equipment (such as this one for the purchase of helmets and vests), and to Come Back Alive, Ukraine’s largest army support foundation. Further donations can be made to verified humanitarian and aid organizations to support the wounded and citizens who either cannot leave or who have chosen to stay. Supportukraine.co is a useful master list detailing additional remote support mechanisms. New, ingenious methods of support have also surfaced, such as reports of people all over the world booking AirBnB properties in Ukraine to send funds directly.

Your activism is also needed. Large protests have erupted across major cities globally, and these continue in efforts to pressure governments to send assistance to the Ukrainian government, sanction Russia further, and condemn Putin for the invasion. Activist resources such as stopputin.net and compiled google documents are circulated to help people write to their governments, NATO, and the European Union.