Youth Aren’t Just The Future: We Are The Present

Call it naiveness, but I still believe in the idea of a world where we are all be treated as equals, and forms of discrimination such as racism and sexism no longer exist. For most people, it seems like an unattainable dream. Adulting slowly pushes away this idea away, as headlines pour in with more stories of inhumane acts and discriminatory behavior all across the world.

My goal is to make this dream a reality. Even if I don’t see perfection in my lifetime, I aspire to get as close as possible to it as I possibly can and rally up the generation of youth to continue the chain.

My name is Alisha Aslam, and I am a youth activist who advocates for social reform, equity, and youth to be at the center of change. Education is a never-ending pursuit and it’s something I will always live by.

Ever since I was in school, I had a yearning to push myself beyond my limits and speak up for myself, my class, my school, and everything in between. Of course, that does not mean every advocacy initiative I took on came easy, but as long as my drive was there, I was able to overcome my obstacles.

It’s this burning desire to constantly improve as a person and be inspired by diligent figures and creatives that have kept me going despite the turmoil that the world has gone through. It’s the hope that working hard and including everyone always gets you positive results. Now, how do you channel that energy in results? You start. Start listening, reading, showing up to town hall meetings. You get involved and take action, and that starts with, well.. starting.

In elementary and middle school, I thoroughly enjoyed doing the announcements each morning, attending S.T.E.A.M. (Science Technology Engineering and Math) meetings, running for the School Leadership Council, and more along with balancing the workload of school. All these activities may seem like the ordinary, run-of-the-mill type “student life,” but it is here that thoughts are formed and ideas take off. As young people, school has been where we have spent the most of our lives. A significant portion of our development is spent here, so whether we notice or not, the people, opportunities, and “norms” at school form our perspectives on the world. A simple interaction with someone will have you applying it to the world. 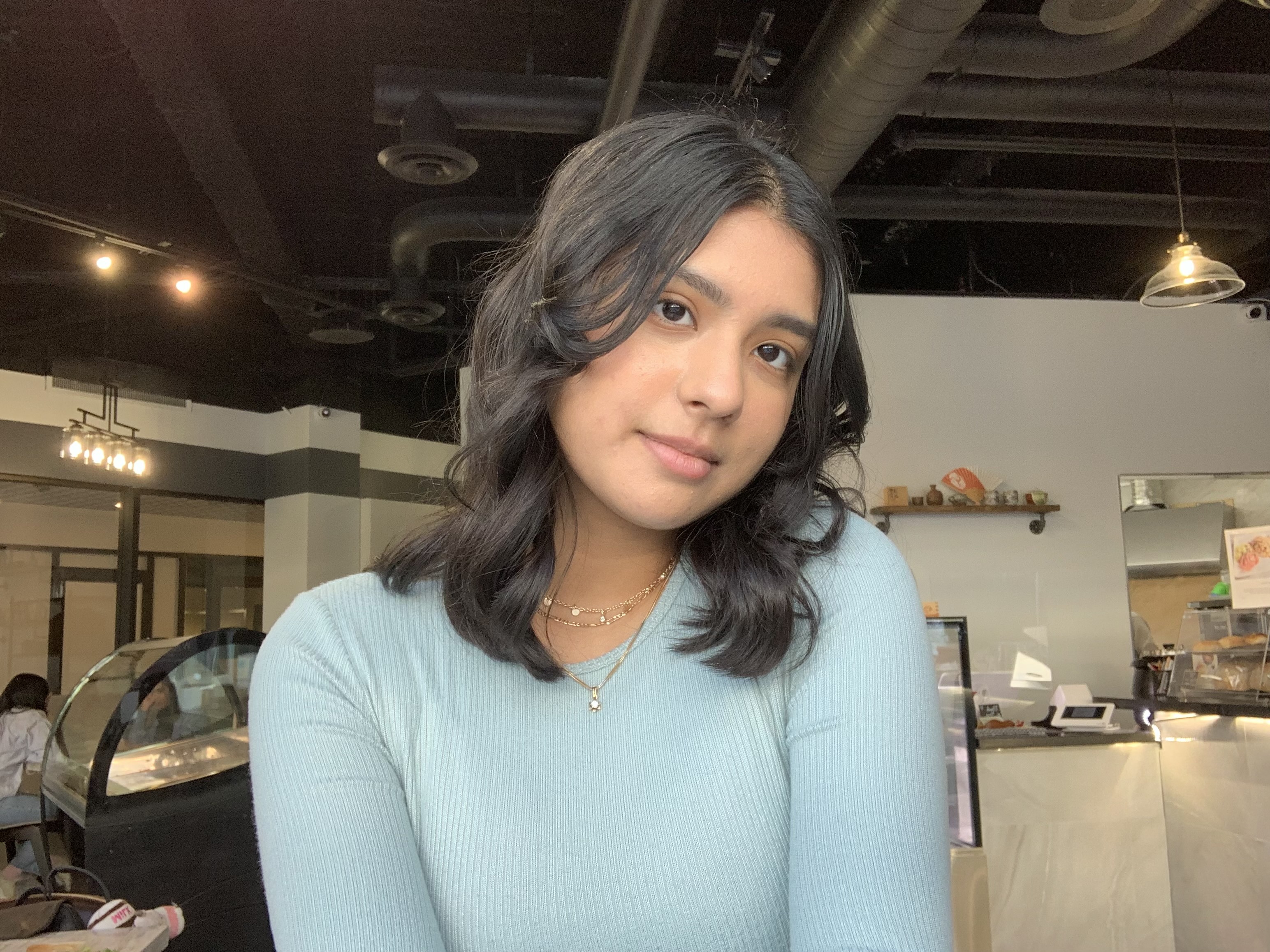 In my case, this interaction was between me and all the opportunities I could get a hold of, which sometimes, wasn’t all that many. However, I vividly recall my teacher walking in and exclaiming, “Alisha! You’re just everywhere, doing announcements and student federal elections!” (I was wearing my poll clerk badge that day). That day, I sat down to finally ponder why I even immersed myself in these activities at all, when many people tell me that they think their voice will never be heard.

To be fair, I understand that perspective. There are so many people in this world, and so many things are evolving at a pace that are leaving people behind, but I am here to argue that your voice does matter.

Impact can happen from the smallest of voices. Think about if one person started planting a flower each day, and then moved up to bushes, and finally trees. Not only would they create a lavish garden for everyone, but it could also get others to want to help maintain and make it better.

I know that impact starts with leadership, and that is why I took initiative. I knew some people would find it weird that I was getting involved with so many things, when in middle and high school, those activities and clubs may not seem like much. For me, they did, because it allowed me to get as close as possible to the things I am passionate about. I wanted to make getting involved a habit that I could carry with me for the rest of my life. Seeing that my actions could impact people even at a smaller level helped me realize that I can create change.

I loved speaking about initiatives or ideas I was extremely passionate about as long as I wasn’t getting too vulnerable. Soon, that all changed after the issues that hit my heart directly such as racism, sexism, violence, and more demanded that I dug deep into my thoughts, extracted roughly-polished ideas, and then mustered up the courage to say them out loud. From hiding my hands decorated with henna at school to finally showing my cultural clothing publicly, I went through a draining battle for years on who I was and how I fit into society, not as a woman, South Asian, student, or teenager, but as a person. As Alisha. Everywhere, there were preconceived notions I ran into and bumped heads with on how someone from any of these groups should be seen as, and these views of others weren’t accurate at all and differed from person to person. As an aspiring leader with her nascent campaigns, I figured the one slate where I can control the narrative and make a name for myself, is myself, my name, and my identity. This led me into spiraling questions where I had yet to figure out my own identity.

Despite this, I knew it was even more important for me to advocate for these issues because nobody else was, and that’s when I wrote my first article on Islamophobia. I couldn’t have done that without being in the countless councils at school, being in the Student Senate of Toronto’s school board, a writer for several magazines, Rising Representative for the Ontario Provincial Youth Council, and more. From there, I wrote for UNICEF, interned with Policy for the People with the Harvard Institute of Politics, and was a CBC Community Champion finalist.

Yet, it is the negative comments and frustration that have occupied my mind a lot these days. After the London attack, I advocated more which led to my creation of a website to counter Islamophobia, but it was rejected by my school’s level. After having worked so hard on this project, the rejection was really overwhelming. Little did I know that getting up after you fall makes all the difference. I decided to try again, and took it to a higher level. I sent it to my trustee for another chance. She was so generous as to invite me to promote it at her panel. Your story may be different, but yours and mine prove the same idea: the hate may be strong but the love can be stronger, and in a day or a year, the love and hope will always prevail, so don’t lose sight of it.

From speaking at events to writing this, I’ve encountered a fair share of students who understandably, don’t believe they can make a difference because they don’t know where to start. The key is to start whatever's comfortable for you, since the reality is, nobody starts at the top of anything when starting their role. For me, I started five minutes away from home, at the library with the Youth Advisory Group. Today, as I’m writing this, I had the absolute honour of taking up five minutes at the United Nations’ 20th anniversary of the coming into force of the Optional Protocol on Sale and Sexual Exploitation of Children, where I represented the nation. The limits are higher than the sky, so what the first step is for you could be anything and everything you want.

The second key is to acknowledge that we all can make a difference in our own way. Our differences are strengths. During my training course for a school program, wise words were communicated to me which I think are incredibly poignant these days. If everyone was a leader, we wouldn’t function. Some thrive as leaders but others thrive as followers, and in truth, leaders aren’t defined by themselves, they’re defined by their followers. We all know a leader sets an example, but it’s the first person who follows that example who inspires others to do the same, so the next time you think about supporting an advocate, know you have a much more influential role than you know in their journey.

The task of facing these world issues may be daunting, but we as the youth can do it. I hope you can join me in creating a world where youth aren’t just permitted to survive, rather, we thrive. You’re not too young to experience hate or face obstacles as we know, but you’re also not too young to experience love and be courageous, and we need to depend on each other more with trust to make that happen. It’s time to let go of the old purpose to volunteer “just for the requirement” because if high schoolers are going to volunteer, they need to know why they’re doing it. As citizens, we have a responsibility to uphold, and that doesn’t go away after our 40 hours are completed. It’s a stepping stone, a chance for you to start your link in the greater chain of change in our world. Youth aren’t just the future: we are the present because the only way to change the future is to start acting now. This change, it doesn’t lie in your hands, it lies in your voice. That’s how we can bring “unity” in community. You have the power, so how are you going to use it?

We may not be able to choose where we come from, but we can choose where we go. Everyone starts from the ground upwards, so it’s how you water your own garden that determines your growth. Your competency in leadership is never dependent on titles, class, and appearances, and I learned this over the past few years through my own journey. I hope you are able to find that too.