“No man should have a decision over a woman’s body,” Angie Torres, an Orange resident, and rallygoer said.

On Oct. 2, the annual reproductive rights protest took place across America. Thousands of people across the United States took to the streets to march in support of reproductive rights as the strictest bill banning abortion after six weeks since the landmark Roe v. Wade decision.

Most recently, on Nov. 1, the Supreme Court failed to obstruct the law and allowed the ban to stay in effect. Albeit Justices questioned whether states could use similar laws to restrict gun ownership or the freedom of religion.

“As a woman, you must have the choice and right and not have someone else dictate that for you. How are they going to tell you what to do with [your] body, it’s a personal choice?” Torres said.

Women with resources have access to interrupt their unwanted pregnancies. Texas’s new abortion law, S.B.8, imposes restrictions on women’s reproductive rights that will intensify the flaws in the state’s health care system and exacerbate the hardship in vulnerable women.

By the time Texas' six-week abortion ban went to effect on Sep. 1, the anti-abortion non-profit organization Texas Right to Life had already launched a website to anonymously report clinics or anyone involved in helping people obtain abortions. This opened the door for private citizens to turn into bounty hunters and sue medical providers and others.

A lot of women don’t realize they’re pregnant until six-weeks. Even if they have a regular 28-day menstrual cycle, they only have a 2-week window to confirm and retrieve clinic and abortion services safely and legally. The only exception is if there’s a medical crisis, then they can terminate the pregnancy.

The law doesn’t make exceptions for rape and incest; this has been the turning point and highly criticized by organizations and groups defending reproductive rights. The law rewards people $10,000 for every lawsuit that successfully blocks a Texan from getting an abortion.

“Women of colour, Black, Latina and migrant women are the ones who will suffer the most. Some of these women will be faced with carrying out a pregnancy they don’t want,” said Marcela Howell, head of In Our Own Voice: National Black Women’s Reproductive Justice Agenda.

It disproportionately affects Hispanic and Black women and vulnerable women who don’t have medical insurance or access to meet the extra costs and expenses to travel to other states.

According to Guttmacher Institute, a pro-choice research and policy organization, restrictive abortion laws that add an extra trip to the clinic may run into “logistical challenges and costs related to childcare.” This includes taking time off work, travel and lodging. These costs may be barriers for those with low incomes, a group that Guttmacher Institute notes as a group that experiences high unintended pregnancy rates.

In Texas, the average cost of abortion services ranges from $450-$570 in the first trimester and increases from $850-$3000 in the second trimester.

The average one-way drive distance to an abortion clinic is anywhere between 12 miles to 248 miles, according to research from the Guttmacher Institute. The minimum wage in Texas is $7.25 and traveling to abortions clinics outside of Texas can be time-consuming and means having to spend more than 3.5 hours to pay the additional cost to cover a one-way trip.

The nearest clinic is in Louisiana and Oklahoma, with few abortion clinics and limited to their restrictive abortions’ laws. Some of the restrictions include mandatory counselling and 24 hours before a second visit, and to receive abortion services can take several days.

Women who are denied abortions appear to be detrimental to a women’s economic hardship and magnifies the outcome that women have been struggling to make ends meet, according to 2018 research published in the American Journal of Public Health.

Women in other states are startled by the ban and hopeful that the six-week ban can be overturned and for once making Roe v. Wade a federal law.

“Women should be able to decide what to do with their own body,” said Velia Salazar, a L.A. resident and rally goer, “I’m glad California isn’t going to be like Texas and Florida. I hope other states follow California.” 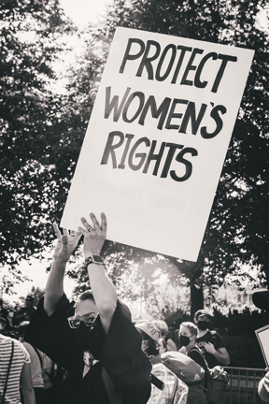 Other states are slowly starting to adopt the same laws. South Carolina and Florida are among the states that applaud Gregg Abbott and intend to pursue the same Texas-style ban.

Today, nearly a record of 100 abortions restrictions have been placed on existing laws across the United States, according to Guttmacher Institute. 26 states are likely or certain to ban abortion without Roe v. Wade.

Supreme Court is expected to hear an abortion case on Dec. 1 that can overturn Roe v. Wade. The argument is surrounding Mississippi’s 15-week abortion ban, whether abortions before a fetus is viable are constitutional.

“It’s a well-known fact that restrictions don’t stop people from needing abortion. Instead, they push care out of reach for many people by making abortion more expensive and logistically challenging to get. If Roe v. Wade is overturned, people seeking abortion will have to travel significantly farther to get care,” says Dr. Herminia Palacio, President and CEO of the Guttmacher Institute.